A BIG thank you to Go Go, ARam and Mike Fiers 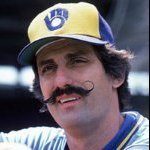