Give us your best tips on watching a game at AmFam 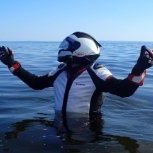